Trek to an isolated beach near Pissouri Village in Cyprus 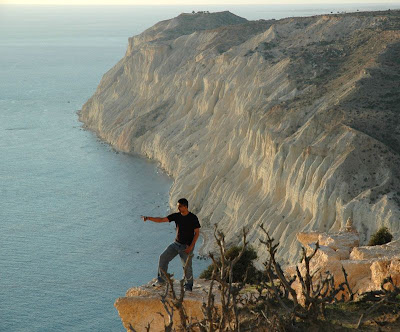 If you can call any trek dramatic, then it has to be this one. The views and the thrills offered by this trek are amazing and this has to be one of the best coastal treks in Cyprus. I found this trek from a book called “Walks in Cyprus”, but this is a very old book and the directions don’t hold good any longer as he refers to “a building under construction” in many places as references and they are obviously no longer in that state.
Highlights of this trek
– Excellent photo opportunities with the cliffs and the sea
– An isolated beach at the end of the trek, reachable only by boat or through this walk
– Pissouri Village is just a short drive away from Paphos/Limassol 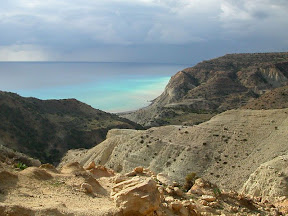 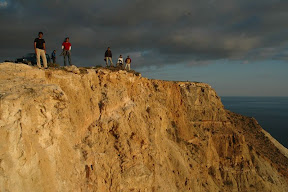 Things to note if you are going on this trek
– You need good shoes with a strong grip as almost the entire route consists of just barren loose rocks and is very slippery. Some sections of this trek are extremely close to the edge of the cliff, so you wouldn’t want to risk “slipping” over the edge!
– Take lot of water. Even the downhill section gets tiring. It takes approximately an hour and a half (with lot of photo breaks) to go downhill and an equal amount of time uphill. Uphill is much easier.
– The best time to do this walk is in early winter or in spring. You are totally exposed to the elements on this walk and it can get very hot/cold if you are walking in the peak seasons. 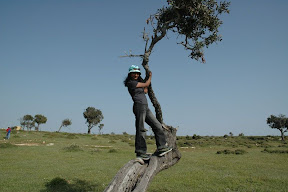 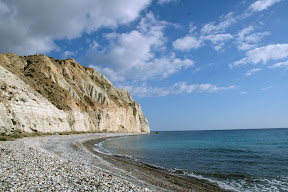 How to get to the starting point of the trek: The treks starts from the top of the hill on which Pissouri village is located. Pissouri village is a short drive from Limassol/Paphos. Once you drive up to the centre of Pissouri, keep on going straight (there is only one narrow road) until you come to a fork in the centre of the road. Take the left and keep going. You should always be on the “main” road and not venture into the small exits which lead to apartment complexes. After a while you should see a tall tower somewhere at the end of the road. This is supposed to be a military complex. Park anywhere near the apartments before the tower complex and walk around the tower to go behind it. You should hit a trail clearly visible at the edge of the cliff. Start walking towards the right (west) towards the beach. That’s it, you are on your way. 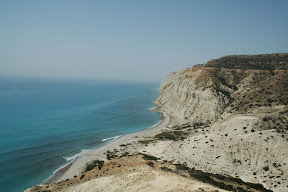 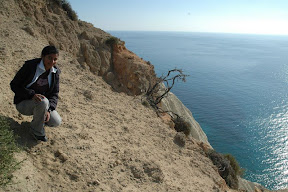 I have been on this trek three times. The first time, we didn’t know the correct starting point, tried to find a way ourselves ( we knew we had to reach the beach, it should be easy to find a way!), got lost and ended up on a cliff which had no way out! The second time, we took a better approach, followed a stream’s course (They all have to flow into the sea, right) and ended up at the top of the 20 foot waterfall which we obviously couldn’t climb down. But, we managed to climb up the sides and find the correct path and we reached the beach. The third time ( very experienced now!), we went on the correct path. I am writing about all the three attempts below. So, if you are just interested in the correct way, scroll down to the third story. But, you might miss some good photographs if you do so 🙂 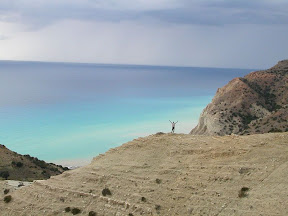 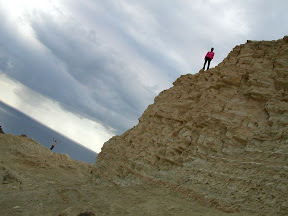 We didn’t quite understand the map drawn in the book for this particular trek. There was a mention of a goat enclosure. We found one, assumed that this was the one mentioned and started walking in the direction of the beach. After 10 minutes, we realised that there was no way that this could have been the correct way, but we decided to press on anyway. We also saw a herd of mountain goats on the way and felt happy that we were not the only living beings around. We finally reached a cliff beyond which, we concluded, there was no safe path towards the sea.(the place where Gopal is standing in the first pic above) So, we started climbing the cliffs and rocks on this cliff for lot of photo ops. Looking back, this attempt was lot of fun as it was totally investigative in nature and at some places, it was a real struggle to keep going. 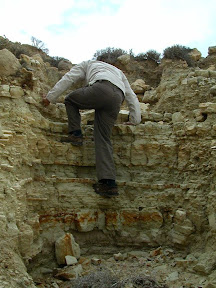 Second attempt (Took lot of time, but finally made it): 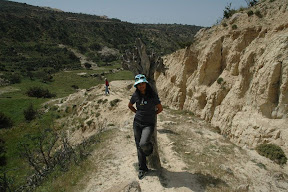 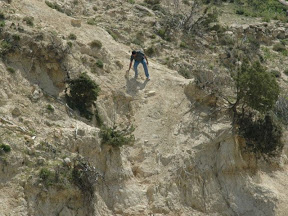 This time Puneeth gave the suggestion of following the path of what would have been a stream in the rainy season(The path in the first photo above). It was an interesting suggestion and we enjoyed the initial part of the walk. Since we were following the stream, we had to walk through narrow gorges, over rocks and some pretty slippery terrain. The most fun was to climb down the places where there would have been a waterfall in the rainy season. We did climb down quite a few of them, some even around 6-7 feet tall. Puneeth and i decided to follow the exact path of the stream which meant scrambling through thorny bushes into steep gorges while others preferred the safer longer route. 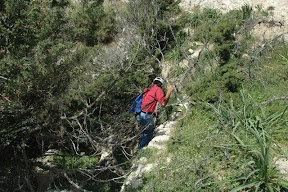 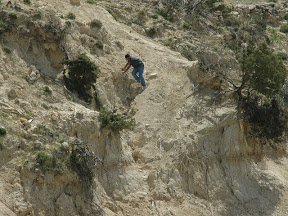 The path became more and more meandering (we were enjoying it). Then as i was walking around a blind corner, i came to a waterfall. Good that i had been walking slowly, otherwise, i cannot imagine the situation i could have been in. The fall was more than 10-12 feet high and there was no way we could climb down the wall. We had no option but to look for other routes. But, we were stuck in a gorge with steep walls on either side. We didn’t want to retrace our route, so we took the decision to climb the walls. It was tough, but we managed it and continued on “top of the stream” towards the sea. Luckily, we saw two other trekkers in the distance, the kind who come out with a backpack and walking sticks (the so-called pros) and they seemed to know where they were going. So, we went in their direction and found something resembling a track. We realised that this was the elusive path we had been looking for and finally managed to reach the beach. Btw, this was the first and only trek in which Parthipan was short of breath and needed rest! 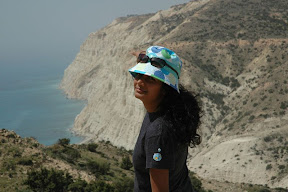 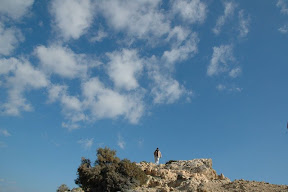 Third Attempt (Now, we are pros on this trek!):
So, to continue from the initial paragraphs, once you park near the tower complex, go around it (from the left) and keep going towards the edge of the cliff. There you will see a clear goat-path going towards the right. This is the track you should take. All along the track you will see markers put by trekkers (even we have contributed to quite a few of them) consisting of few rocks on top of each other. So, if you see them, you know for sure that you are on the right track. There are even markers on the beach to tell you that you have reached the correct beach !! 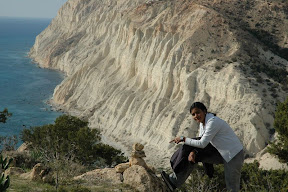 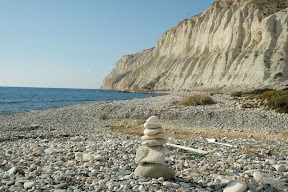 The path can get slippery at places and it was interesting to see the approaches taken by my friends in overcoming those obstacles! 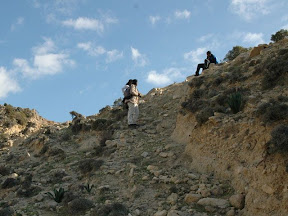 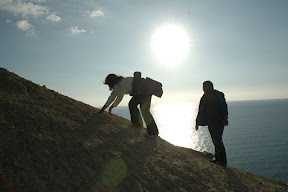 i was the first to reach the beach and has some good opportunities to take photos of the rest of the gang climb down. 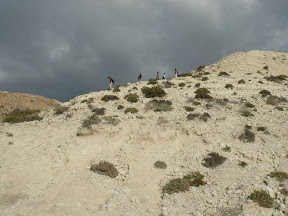 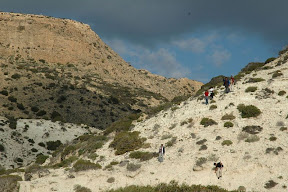 Don’t forget to take lot of breaks during the trek for taking photographs. If the weather turns out to be fine, you can get some real nice pictures. Enjoy the trek and drop in a comment about your experience! 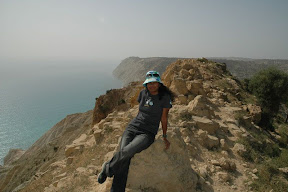 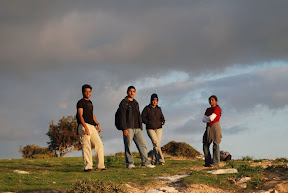 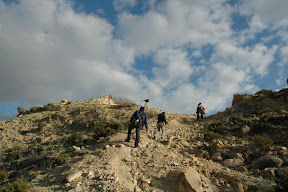 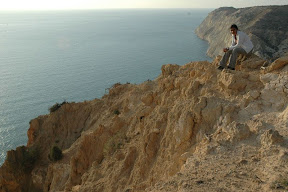 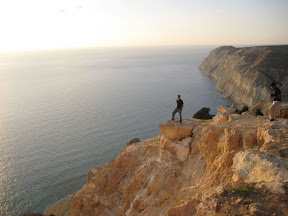 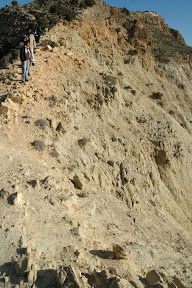