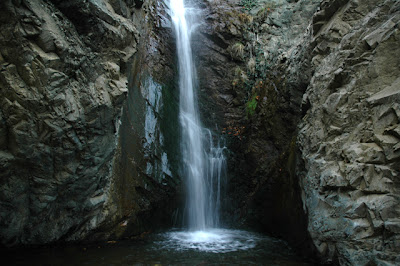 Though Kaledonia waterfalls is claimed to be the highest waterfall in Cyprus, the milomeri waterfall is a few metres higher. A probable reason for this could be that access to Millomeri was made easier only a couple of years back and not many people know about this place. There is no doubt that the trek to the Kaledonia fall is much more beautiful and green than the regular approach to Millomeri, but this one is better for the ones who don’t want to trek, but want to just step out of the car and visit places.
A possible explanation of the name comes from greek words for Wet (Millos) and Meri (Place) meaning wet place, but i checked with many Cypriot colleagues of mine and none of them seem to recognise the word millos to have the meaning “wet”. Anyway, the road to Millimeri falls was opened up in the past few years and it has caught up as a tourist destination.
There are two ways to reach this waterfall

The driving option: The exit to Millomeri falls appears 2 kms before the first exit to Platres on the way from Limassol to Troodos. The exit appears right in the middle of a sharp right turn (from Limassol to Troodos), so it is easy to miss it. So, watch out for the distances on the signboards, the exit should come approximately 2 kms before Platres when the road turns right on the main road. After a short distance into this exit, the road apparently deteriorates, but don’t worry, it is good enough for any car to go on. But the final stretch of a few hundred metres depends on the landslide conditions and i have seen situations where the road is just a few metres across at places because of fallen rocks. You keep on going until you come to a wide open area which seems to have a dead-end across a small bridge. This bridge finishes at a kiosk (which i have never seen open!). Park anywhere here and then right after the kiosk, you will see a long flight of stairs to the right. This will lead you to the base of the falls. 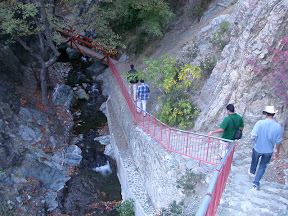 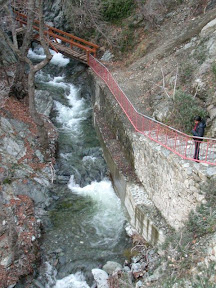 The trek to the falls: This is a small trek of around a kilometre one-way, but it does involve lots of ups and downs, so it is better if you plan to take a break (with drinks/snacks) at the falls. Go to Platres, drive towards the platres church. Actually, just keep driving along the road when you enter Platres, don’t take any of the smaller side lanes and you should reach the church. The waterfall lies in the valley down below. The start of the trek is a small path going down just after a house around a 100 metres before the Platres church. The path is quite slippery at the start, so be careful if you have got kids tagging along.
The path is very green particularly in winter/spring it is an enjoyable short trek. Don’t be surprised if the patch climbs a lot after the initial downward slope. You drop down to the valley then climb all the way up to the other side of the mountain and again all the way down to the waterfall. At one particular spot, a little bit of adventurous climbing could actually land you on top of the millomeri fall. 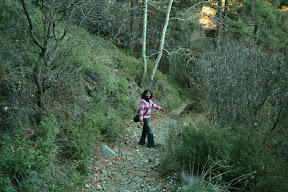 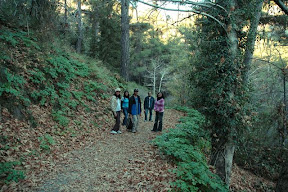 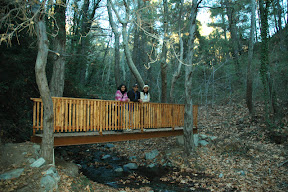 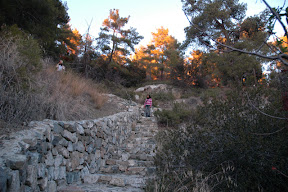 If you have reached the waterfall by car and feel that you haven’t done anything adventurous enough, try to climb the slope opposite the waterfall and reach the lone tree on top of the slope. Climbing up is pretty easy, but coming down is tricky as the slope is made up mostly of loose rocks and for some reason, the rocks also want to come down the slope along with you. 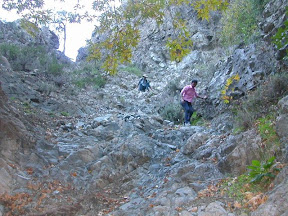 So, the next time you are off to troodos, take this small diversion and enjoy the “highest” waterfall in Cyprus. If you are going in winter, it gets really cold at the fall, because is is deep in a valley with little sunshine. So, be prepared with lot of warm clothes. Also, the amount of water increases a lot in winter because of the melting snow and it can be quite an adventure just to get to the base of the fall.
Look at the difference below. The first one was taken in winter and the second one in summer. But, one thing is sure, any time of the year, a visit to Millomeri waterfall is a good trip to make. 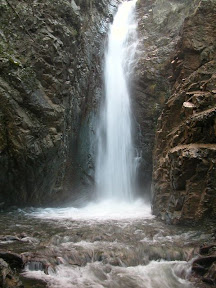 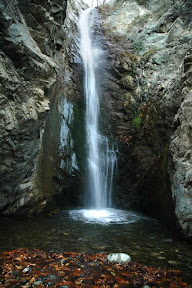